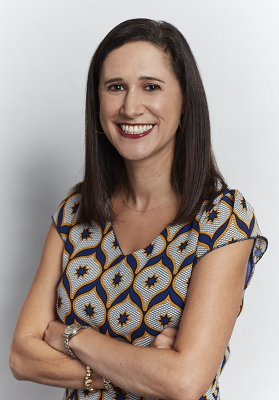 Washington, DC (October 19, 2020) – The Board of Directors of Grantmakers In Aging (GIA) has named Lindsay A. Goldman, LMSW, as its next Chief Executive Officer, effective January 1, 2021. Ms. Goldman succeeds John Feather, PhD, who is retiring after leading GIA since 2011.

“GIA is thrilled to have Lindsay Goldman join us as our next leader,” said Rani Snyder, MPA, Chair of the GIA Board and Vice President for Program at The John A. Hartford Foundation. “She is energetic, articulate, and a real go-getter who has experience on all sides of what GIA does: as a funder and a grantee, in fundraising, and as an effective spokesperson for aging. Thanks to the support of the entire GIA community, Lindsay is joining an organization that is well positioned to make an even greater impact. We are going from strength to strength.”

GIA acts as a relevant and responsive network, resource, and champion amplifying the voices of older people and issues of aging and is the nation’s only affinity group for funders working on aging.

Goldman comes to GIA from The New York Academy of Medicine, where she is finishing her tenure as the founding Director of the Center for Healthy Aging. Specializing in public-private partnerships to create age-inclusive environments, she oversaw a diverse portfolio that included the award-winning Age-friendly NYC and Health & Age Across All Policies initiative in New York State; the WHO Collaborating Center on Aging, Globalization, and Urbanization; and IMAGE: The Interactive Map of Aging, an online data tool for policymakers and funders. As a thought leader and policy implementation expert, Goldman has testified before Congress and frequently speaks at international and national conferences on aging.

Prior to her time at the Academy, Goldman worked at the UJA Federation-New York, where she was responsible for strategic planning and grantmaking to support older adults, as well as emergency preparedness and response, and information and referral services. She also led the Health Enhancement Partnership, an adult day program at Lenox Hill Neighborhood House, for which she received a Best Practice Award from the National Council on Aging. She began her career at Big Brothers Big Sisters of NYC, where she coordinated an intergenerational mentoring program in the Bronx.

“I’m excited to join GIA at this pivotal moment when its mission is more critical than ever,” said Goldman. “We are called upon to respond to older adults’ ongoing and emerging needs, including increased economic, housing, and food insecurity, as well as the existential crisis of health and wellbeing associated with COVID-19 and widespread and necessary social distancing. I look forward to working with GIA and its members to mobilize our collective social and financial capital to generate solutions that are good for older people and communities.”

A Record of Dynamic Growth

An esteemed academic, funder, and association leader, John Feather became CEO of GIA in late 2011 and ushered in a period of new programs, greater engagement, and sustained outreach for the organization. He developed and led several national philanthropic initiatives on age-friendly communities, rural aging and mobility, complex care, caregiving, and HIV and aging, among others.

John Feather announced his intention to retire three years ago, and in preparation for this leadership transition, GIA has built a strong foundation. Under Snyder’s leadership, the GIA Board of Directorshas sharpened its strategic plan, enhanced its operations, and raised nearly $1 million for its Fund the Future campaign to enable GIA to continue to expand its important role as a network, resource, and champion for philanthropy, the aging field, and older adults.

“It has been an honor and a privilege to lead GIA and to work closely with so many people who are deeply committed to the field of aging and philanthropy,” Feather said. “This work is important, we believe in it, and there is more to do, so I look forward to watching GIA continue to thrive and find new and important ways to improve the lives of older people.”

About Grantmakers In Aging (GIA)

Grantmakers In Aging—a national membership organization of philanthropies—acts as a relevant and responsive network, resource, and champion, amplifying the voices of older people and issues of aging. Believing a society which is better for older adults is better for people of all ages, GIA seeks a just and inclusive world where older people are fully valued, recognized, and engaged in ways that matter. Learn more at www.GIAging.org.